Views : 254
Update time : 2020-07-30 13:43:22
The role of niacinamide has been gradually known by the academic circles in recent years. It is widely used in the cosmetics industry and is a multifunctional active ingredient. Its efficacy has been confirmed in many professional journals. Students who know a little about the ingredient list will find that many big-name products contain niacinamide. This article is to introduce the 6 major skin care effects of niacinamide. 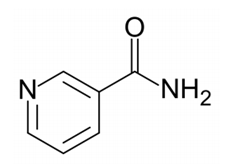 Before you understand the role of niacinamide, you must know:

Niacinamide, also known as vitamin B3 (VB3), is the biologically active form of niacin, which is widely found in many plants and animals. It is also an important precursor of the cofactors NADH (nicotinamide adenine dinucleotide) and NADPH (nicotinamide adenine dinucleotide phosphate). Together with reduced NADH and NADPH, they act as coenzymes in more than 40 biochemical reactions and also act as antioxidants.

Niacinamide is a water-soluble substance with solution stability and light stability. In a solution with a pH of 6, the stability is the best.

1. Skin whitening
Nicotinamide can down-regulate the transport of melanosomes from melanocytes to keratinocytes without inhibiting tyrosinase activity or cell proliferation, thereby affecting skin pigmentation. It can also interfere with the relationship between keratinocytes and melanocytes. The inter-cell signaling channel reduces melanogenesis. On the other hand, nicotinamide can act on the already produced melanin, reducing its transfer to surface cells.
When niacinamide is used as a whitening ingredient, when the concentration is 2% to 5%, it proves to be effective in curing melasma and hyperpigmentation caused by ultraviolet rays. It is said to be more effective in combination with N-acetylglucosamine.

Another point of view is that nicotinamide also has anti-glycation function, which can lighten the yellow color of protein glycation, which will help improve skin tone.

2. Anti-aging
Studies have shown that the use of niacinamide (5%) can reduce wrinkles, erythema, yellowing and stains on aging facial skin. So you don't have to be surprised that Olay's anti-aging line contains a lot of niacinamide. These effects may also be related to nicotinamide helping to stimulate collagen production.

Topical nicotinamide can increase the levels of free fatty acids and ceramide in the skin, stimulate the microcirculation of the dermis, and prevent skin moisture loss. It can also increase protein synthesis (such as keratin), increase the level of NADPH in cells, and accelerate the differentiation of keratinocytes. In addition, it can relieve skin irritation caused by surfactants or solvents.

4. Moisturizing
The improvement of the skin barrier function mentioned above means that niacinamide has moisturizing ability. A small study shows that 2% niacinamide for topical application is more effective than petrolatum in reducing skin loss and increasing moisture retention.

5. Control oil and shrink pores
External use of nicotinamide (2%) can reduce the production of fatty acids and triglycerides in sebum, and has the effect of controlling oil secretion. It is said to have a synergistic effect with sodium dehydroacetate. The reduction of oil secretion will also make the skin pores look smaller.